A recent article on Health Committees (HCs) by George et al. (2015) discusses the intermediary role that HCs play between communities and health facilities. The effectiveness of this role depends on the trust and support that communities and health providers put in HCs, which in turn depends on how well HCs balance community and health facility interests. We would like to further this discussion, inspired by a Roman legend and our own study findings. 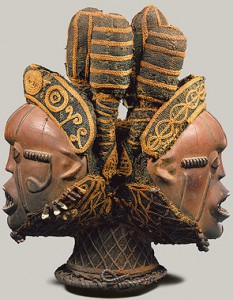 In ancient Roman religion, Janus is the god that presides, over war and peace. Janus is associated with gates, doors, and passages that were open in time of war, and closed in time of peace. He has two faces, one looking to the future and one to the past (Wikipedia). Janus-faced symbols exist in all cultures, such as in this Nigerian mask to represent different forms of duality.

What does this have to do with Health Commitees? HC members in our study in Benin, Guinea and DRC often described their own role as “bridges” (“jouer le pont”) between the community and the health centre. Other respondents referred to HCs as “gatekeepers” to ensure a smooth running of the health facility, to “filter out” potential problematic patients and to soothe misunderstandings between users and providers. Besides their role in the daily co-management of the health centre, this brokering role seemed part of daily practice and crucial for users as well as providers. Similarly, when asked what HC members’ ideal profile would look like, participants often responded that besides “knowing about health, and being able to apply the management tools”, HC members would need the ability to understand both medical and community interests on health care and be able to mediate between them. Hence the comparison of HCs with Janus and the question this blog addresses: how do HCs cope with their dual role as representatives of the interests of both users and providers? And is this dual role desirable or should we focus on one role?

In our study, we saw HCs using both faces, sometimes deliberately emphasizing one face over the other. When HCs used their “community face” they engaged in monitoring health workers’ behavior at the health centre and in advocating for quick or better treatment of patients, better public display of consultation fees or protecting users from misbehaving health workers by using formal reporting mechanisms. HCs using their “provider face” engaged in supporting material distribution, sensitization campaigns, conduct household visits, co-manage drug funds, ensure cleanliness of the health centre or provide health services.

What does the literature say about the dual role of Health Committees?

In the literature, Falisse et al. (2012) suggested that the dual role of controlling and criticizing on the one hand and collaborating on the other could be conflicting but in our study most HCs seemed to be able to cope with combining the roles; McCoy (2011) who conducted a literature review concludes the same. So is the ambivalence in roles of HCs a problem or not? During our reflections, we came across the work of Eric Wolf, an anthropologist who wrote on the complexity of group relations in 1956, way back before the Bamako Initiative. From his point of view, Health Committees’ role is actually to maintain the tensions between users and providers; they should not settle conflicting interests since by doing so, they would abolish their usefulness for both groups. In this sense, HCs would not have a raison d’être but for the tensions between users and providers or communities and the state at large. This would require HCs to carefully use their Janus face and navigate between the two roles. This suggests that the dual role of HCs should be strengthened and that it is possible for HCs to act simultaneously as representatives of the health system and as advocates for communities from which they come.

What is your point?

How does this work in your settings and experience? To what extent are HCs capable to navigate interests? Does the composition and mode of election matter? Should both roles be strengthened or are you in favor of HCs focusing on one role?

Please, send us your opinion at the section ‘Comment’ !!!

2 Responses to Community participation: The Janus face of Health Committees in sub-Saharan Africa