Community health approach: The Mali experience with monitoring of people who had contact with Ebola Virus Disease cases

Dr SACKO Ramata, Chief of the Epidemiology Unit at the Department of Community Health of the National Institute for Research in Public Health, Mali.

My collaborator Mr. CISSE Zibada and I had the honour to attend the 2015 EBODAKAR Colloquium which took place from 19th to 21st of May 2015 in Dakar. We shared our experience with the monitoring of persons who had been in contact with the Ebola Virus Disease (EVD) cases. We present here the summary of our experience.

When EVD emerged in the country with the declaration of the first case on the 23rd of October 2014 in Kayes, Mali focused on the search and monitoring of persons who had been in contact with EVD patients. This contact tracing is essential to break the chain of transmission and contain the EVD.

The objective of monitoring is to identify all people who came into contact with an EVD case; to search for overlooked cases with the effective involvement of the community; and finally, to ensure  screening and management of all cases. 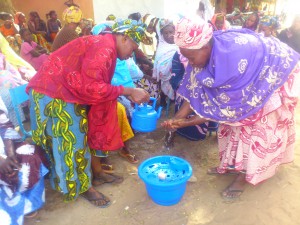 All these persons who had been in contact with EVD patients were followed for a period of 21 days between the 23rd of October, the starting date of the outbreak of EVD, and the 18th of January 2015, when the end of the epidemic was declared. After identification of all persons who had potentially been in contact with EVD cases, we regularly evaluated their health status for 21 days.

This monitoring was conducted by a team from the National Institute for Research in Public Health (INRSP). This team was part of the sub-commission for contact tracing, and was integrated in the Committee of epidemiological surveillance, laboratory and management of data from the Centre of Emergency Operations. This team was headed by a coordinator whose responsibilities were to coordinate the activities and supervise monitors as well as their supervisors, to verify and compile the data on monitoring of persons who had been in contact with EVD cases, and then convey these data to the Emergency Operations Centre.

The work of the team consisted of identifying all persons who had potentially been in contact with EVD cases, taking their temperature and performing a clinical evaluation twice daily, at home or in a health facility, depending on the contacts’ own choice. In addition, individual interviews were conducted to search pro-actively for overlooked cases in the community, to raise awareness, and identify their concerns in order to provide appropriate solutions and minimize stigma. This contact tracing        and monitoring was facilitated by the support of our technical and financial partners: WHO and CDC supported training and supervision, whereas the Mali Red Cross and the NGO Santé Mali provided monitors and involved the community. It is also important to emphasize that the persons who had been in contact with EVD cases received psychosocial care from a socio-anthropological team during and after the follow-up period. This facilitated not only their follow-up, but also their reintegration in the community.

Some organizational and financial problems occurred during this contact tracing and monitoring, namely: i) the quarantine concept was misunderstood by the health professionals who had contact with confirmed cases and also misinterpreted by the community ii) confinement of Ebola case contacts to the hospital iii) the “invasion” of the Ebola case contacts by various international NGOs seeking information from some families and even at the hospital iv ) the reluctance of some persons to adhere to monitoring and travel restrictions v) stigmatization of case contacts at all levels, but also of their families, and even of schools and markets for traders who had been visited by people who had been in contact with EVD cases vi) threats by neighboring families to families with EVD cases or case contacts. For example, the house where the first case was diagnosed in Kayes was damaged and the whole family abandoned by the neighbours.

How did we manage these difficulties?

In order to settle or at least mitigate these disputes, the involvement of everybody was needed, starting with the governor of the region of Kayes, health personnel supported by technical and financial partners, religious leaders, and the network of traditional communicators. Meetings and strong sensitization messages were delivered to the population at every opportunity to appease the anger of each other. Presentations on EVD permitted to remove some doubts and rumours. The meetings and community visits promoted the identification of potential cases and correct monitoring in order to minimize the risk of contamination and to eradicate the epidemic in Kayes. In Bamako, meanwhile, families were falling apart, divorces contemplated, fights with fractures took place, tenants who had been in contact with EVD cases were evicted from their houses…. In short, the community was very confused. Yet, thanks to the unwavering commitment of the team in charge of monitoring of the Ebola case contacts and the support of social anthropologists, almost all these social problems have been solved by now, and all persons who had been in contact with EVD have been accompanied in their community.

The response to the EVD epidemic requires good preparation and very quick management of the first case, isolation and monitoring of persons who have been in contact with EVD cases. The end of the epidemic in Mali was made possible through the effective monitoring of these Ebola case contacts, conducted by a joint team of health workers and social scientists. This experience was based on the progressive development of relationships of trust with the people. The experience can serve as an example for the management of other outbreaks.

One Response to Community health approach: The Mali experience with monitoring of people who had contact with Ebola Virus Disease cases