Fighting against diseases or strengthening health systems to deliver adequate care: what is the better choice?

For more than a year already, the Ebola Viral Disease (EVD) outbreak is raging in Guinea, Liberia and Sierra Leone.  International NGOs and other stakeholders are struggling to contain the epidemic and bend the curve.  Lately we’ve been seeing encouraging progress, but the path to ‘zero Ebola cases’ is still long.  All health experts have recognized that the weakness of the health systems in the affected West-African countries was a major determinant of the spread of the disease. A lot of money has been allocated to the fight against EVD by donors through international NGOs such as MSF.  Although many of these organizations do very important work, especially in a crisis like this, we can question how this money is used and has always been used in such situations.

In most sub-Saharan African health systems, multiple vertical programs and general health services (GHS) delivering health care coexist. However, more often than not,  health systems remain weak and unable to deliver adequate care and cover the health needs of the population. This has led to continuing high morbidity and mortality rates related to preventable and/or curable conditions such as infectious diseases (like malaria, tuberculosis, HIV/AIDS, …). Ebola exposed the vulnerability of weak health systems lately. But weak health systems are also a problem for dealing with NCDs, already a huge problem in LMICs too.

As is well known, the poor performance of health systems has generated a fierce debate on the pros and cons of vertical and horizontal approaches. This debate has lasted for over 50 years, tends to be driven by ideological positions and has consumed many health resources and energy. The terminology has  changed over these years. The main debate from the early 60s to 70s was one between supporters of vertical programs and those of GHS. After the Alma Conference on primary health care, the debate then moved in the 80s to the use of selective versus comprehensive primary health care to improve the health of the population. In sub-Saharan African health systems, district-based health systems were the mantra after the Harare Conference (1987). The debate then shifted in the 90s to the integration of vertical programs at the district level (or lack of integration).

Since 2000, hundreds of Global Health Initiatives (GHI) have seen the light  – The Global Fund against HIV/AIDS, Tuberculosis and Malaria, GAVI, Roll-Back Malaria, Stop TB Partnership… are some of the most prominent ones; Foundations have also been playing an increasingly important role in the global health architecture (with the Gates Foundation as the prime example). These GHIs pool funds and expertise but they concentrate their efforts on specific diseases. They mainly focus on mitigating specific constraints that undermine the delivery of disease-specific care. Even though most of these GHIs have included health system strengthening efforts in their portfolio and are arguing for implementing relevant interventions, health systems in sub-Saharan Africa remain typically weak. Therefore, the current debate revolves around using a selective or comprehensive approach to strengthen health systems. This was the subject of my Phd thesis (http://dial.academielouvain.be/handle/boreal:152742?site_name=UCL ) which I recently defended at the Université Catholique de Louvain (UCL), Belgium. 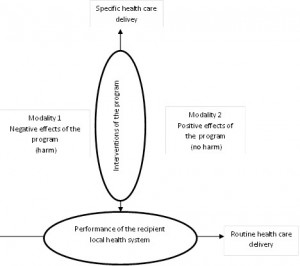 We studied the effects of programs on local health systems and found that each program can have  both positive and negative effects on general health systems. However, some effects impact the health system more than others. Therefore, the result of the interaction between a vertical program and GHS is not just the sum of positive effects counterbalancing negative ones. Potter and Brough  developed  a pyramidal conceptual framework with four levels of capacity needs of the general health system. These levels are: i) tools; ii) skills and competencies; iii) staff and facilities; and iv) the system, structures and roles. The Potter and Brough classification is similar to what Chee et al (2012) more recently  described. They clearly distinguish health system support from health system strengthening. The former includes interventions regarding tools, skills and competencies –situated at the top and the middle of Potter & Brough’s pyramid. Even though these interventions are pertinent to ensure the delivery of health care, they do not lead to processes that can bring lasting change and performance.

The latter, health system strengthening, corresponds to the basis of the pyramid. It includes system capacity, i.e organizational systems and processes, stewardship, role capacity, accountability systems, and performance management systems that enable the system to achieve its objectives. Also, structures are created and/or reinforced to maintain in the longer term the development of processes to achieve higher performance. Lastly, people play their respective role, and are accountable not only to the hierarchy but also to the lower level  of the health systems and the population.We agree that in emergency situations such as the EVD outbreak, it is difficult to think and act while keeping the longer term in mind. But when these international NGOs in fact “become” the local health systems, there is a problem. We could use the health resources more efficiently, we believe. We could learn from the mistakes of the past to build a better future.

Many opportunities are not seized at all levels – district, regional, central and international-, by health system and program managers to develop synergies between programs and GHS and to reinforce local health systems.  Our research revealed that the reasons for not seizing opportunities are due to a mix of individual, functional and structural factors. Individual factors are related to skills, competencies, attitudes and behavior of the stakeholders. Functional factors concern the implementation of health system operations such as planning, monitoring, supervision, resource allocation, monitoring and evaluation. Finally, structural factors comprise organizational structure and culture. These factors are systemic and complex and tend to act as a vicious circle that does not only lead to missed opportunities but affects the functioning of the entire health system.

Seizing opportunities thus requires the transformation of the vicious circle into a virtuous one. This is not an easy task. A first recommended strategy is to strengthen the stewardship function at all levels of the health system. A second one is to monitor the interface between GHI and NGOs and health systems in order to prevent negative effects and reinforce positive ones. A third strategy is to move from health system support to health system strengthening. This requires moving from short term deliverables to long term planning and vision. Improving systemic and structural capacity is more complex and needs more time than providing tools or reinforcing skills.

Fighting against diseases – as has been the case for many decades – might be more sensational and facilitate fundraising for GHI or international NGOs.  The new ‘Global health security’ agenda will probably not change that. But by implementing the three strategies listed above, the relationship between GHIs, vertical programs and GHS could be optimized (or at least improved substantially). If not, populations and especially the poor will continue to pay a heavy price for sub-optimal interfaces between GHIs, vertical programs and GHS. Conversely, these strategies, if done well, will empower local health systems to deliver adequate care and cover the health needs of the population.

2 Responses to Fighting against diseases or strengthening health systems to deliver adequate care: what is the better choice?