This war cannot be won without local community involvement

In this blog post, Michel Muvudi, a public health specialist shares his personal experience of the fight against Ebola during the epidemic in Mweka-DRC in 2007. His main message is that disease response strategies need to be built on strong community participation and involvement. 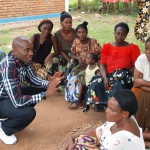 The epidemic of the Ebola Virus disease (EVD) is heavily affecting our continent, particularly the Western and Central parts of Africa. Many observers have stated that the scale of this epidemic mirrors the profound weaknesses of our health systems. We have also understood the current scale of regional migration within Africa. The question that comes to our minds is: what will be the outcome of this epidemic?.

I recently returned from West Africa, where I had the opportunity to discuss with colleagues from “Doctors without borders” and with colleagues from research centres in the region. The stories of what is currently happening there are both frightening and sickening: thousands of patients who visit health centres do not get appropriate treatment. Deaths from Ebola, they say, are counted in communities, at the doors of hospitals and health centres. When I compare what happened in the past in my country- the Democratic Republic of Congo and what is currently happening in West Africa, I can’t help but be convinced of the inherent need to strengthen African and international solidarity around this grave problem. As such, I will support the eventual action that the CoPs will take against Ebola.

I do not know whether one can say that DRC had the ‘opportunity’ to experience several epidemics of EVD. Nevertheless, we realize that these waves of epidemics enabled us to learn from our mistakes and successes. DRC has so far experienced 7 EVD epidemics (Yambuku, 1976; Tandala, 1977; Kikwit, 1995; Mweka 1, 2007; Mweka 2, 2008; Isiro, 2012; Djera, 2014) with each one different from the others.  Personally, I found myself involved in the fight against Ebola during the Mweka 1 and Mweka 2 epidemics. Today I follow, though from a distance, the current epidemic in Djera in the province of Equateur. So what have I learned?

When the first epidemic broke in Mweka, it took the health team over there several months to realize that they were dealing with an EVD outbreak and not something else.  While I was conducting health supervision visits in rural hospitals (I was at that time the provincial coordinator of specialized health programs, responsible for the provincial commission on emergency and disaster programs), I was informed by the health personnel of an unusual influx of patients in many health centres for enduring fever, diarrhoea, stomach pain coupled with vomiting. Many of these patients were visiting hospitals after having first sought treatment in health centres.

I had gone to visit these patients who were of all ages and I thought, as did many of my colleagues, it was probably a typhoid fever epidemic. Indeed this region is known for its scarce availability of clean water. In the days that followed, the cases continued to increase and many more patients started to die, mainly as a result of dehydration. Nobody thought of EVD. While visiting a hospital ward, the health personnel there presented the case of a young boy who had died shortly before and who had presented haemorrhagic symptoms at the late stage of his sickness.  The word “Ebola” suddenly pounds in your brain – but maybe as a defence mechanism – you resist this option.  A WHO colleague who was with me during this mission proposed that we take a blood sample and send it to a laboratory for testing.

The confirmation crushed us. The epidemic that was ongoing for months in Mweka was the return of Ebola. Faced with such a situation, ideas start to run wild and fast in your mind. You know for example that many colleagues within the health care system will soon pass away – you start to envisage your own death.

Despite the initial delay of EVD detection, Mweka was well contained. Alerts were immediately sent out and we benefited from the prompt arrival of colleagues from MSF Belgium. In close collaboration with the provincial health structures, they rapidly implemented a disease-response strategy that consisted of case management, contact tracing and secured burials. This was a learning experience for me, and a great relief, as our health system was completely overburdened by this phenomenon.

I am not an infectious disease specialist, but the lesson I have learnt is that the challenge with Ebola may reside in its detection. Previously, EVD was recognizable by it characteristic haemorrhagic signs and its rapid progression that quickly led to death. When I look at the past situation of Mweka and the current situation in Djera, I realize that in more and more patients, EVD first manifests itself through atypical symptoms such as fever, headaches, muscular pains, vomiting, diarrhoea etc. All those amongst us who have had the opportunity to work as a clinician in sub-Saharan Africa, know that these symptoms are the “daily bread” of an African clinician. It is therefore no surprise that these symptoms mislead both the patients, their entourage and health workers alike. This “trickery” of the virus leads to a situation where in Mweka, Djera and elsewhere, the patients continue with their usual health care strategies: self-medication, traditional healers, spiritual incantations or health centres. When the right diagnosis is finally made, it is often too late and the patient has already infected other people in the family and within the community.

But as I mentioned earlier, DRC has learnt its lesson. The current EVD epidemic was rapidly identified when compared to previous epidemics. As soon as the first cases of the virus started to appear in the population, I was already receiving phone calls and emails from colleagues working in the affected districts: they were already considering the option that they were facing the Ebola virus disease. When they asked my opinion, I could only confirm their apprehensions. Indeed, what they were reporting was very similar to the atypical situation we had earlier seen and experienced. This rapid response, which seems to have been integrated within our health system (could this be the famous resilience of the DRC health care system?) probably contributed a lot in controlling this epidemic. Our communities have also learned: as was the case with the previous epidemics, the health system benefitted a lot from the collaboration and participation of the communities. When the latter are sensitized, informed and involved in the disease response strategies, success is obtained fairly quickly. It is therefore essential that in the planning of health care programs, an important role is given to community participation and collaboration.

This is probably my main message to my colleagues in the continent: let us play the community participation card. My experience is that the communities hold an unfathomable ability to redress and curb the EVD epidemic. We had noticed that it was mostly community health workers and health care agents of the Red Cross who were at the forefront of the fight through actively detecting suspected cases within the communities and reporting them to the health centres. It is also these community health workers who were actively involved in disseminating public health messages and increasing community awareness, inciting them to change their behavioural practices. They strengthened the interface between the community and the health centres. Our vision of the health system is often too focused on health centres or on the technical staff (nurses or doctors). The paradox with Ebola is that while we certainly need these health centres with nurses and doctors in “astronauts’ suits”, we equally need to build the disease response strategies with the population, fully taking into consideration its deprivations and its inherent strength of survival.

However we should not be naïve. Community action is a long term struggle. Personally, I was shocked to learn that despite several weeks of community sensitization and information, some of my fellow citizens continued to eat bush meat. But unfortunately that’s our reality: our populations are very poor and they strive to survive as they can. This brings us back to the absolute need for a multi-sectorial approach…… Yes Ebola is all together the challenge of development.